Sometimes There “Ain’t No Sunshine”… 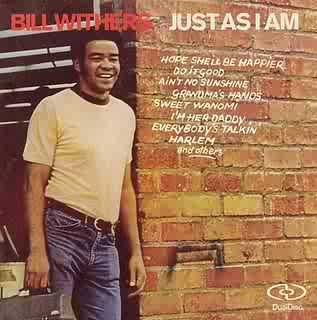 That which does not kill us, will make us stronger, or so the saying goes. Yet, sometimes the things we want most will kill us, like cigarettes, another drink, or the wrong person. This story has been replayed through the centuries, over cultural divides and in every language possible, and it never changes shape. In this case, it was captured and passed on by Bill Withers, a young factory worker found by Booker T. Jones. “Ain’t No Sunshine” encapsulates the want of the human heart, coming like an old friend with a smile on their face, and a gun in their pocket.

Bill Withers spent his days building toilets for airplanes. After 9 years in the military, he was discharged and began work in a factory, day in and day out. Somewhere along the way he met Booker T. Jones, of Booker T. and the MGs. Quickly brought into the studio, Withers recorded Just As I Am, with Jones, Duck Dunn, Al Jackson, Jr., Stephen Stills on guitar and Graham Nash. “Ain’t No Sunshine” was released as a single in 1971 and earned the Grammy for Best R&B Song in 1972.

While some songs are written from a well of personal experience, others are born out of keen outside observation. It’s a special gift when an artist can look at the dynamic of two people and accurately articulate what they are thinking and feeling. Withers got the inspiration for this song from a 1962 Jack Lemmon movie, Days of Wine and Roses, saying:

“I was watching a movie called Days Of Wine And Roses (1962) with Lee Remick and Jack Lemmon. They were both alcoholics who were alternately weak and strong. It’s like going back for seconds on rat poison. Sometimes you miss things that weren’t particularly good for you. It’s just something that crossed my mind from watching that movie, and probably something else that happened in my life that I’m not aware of.”

Withers was lucky enough to be recording with almost the entire Stax house band, with the exception of Steve Cropper. It’s interesting to note that there is a breakdown in the midst of “Ain’t No Sunshine” similar to the breakdown in “Sittin’ (On The Dock Of The Bay)” by Otis Redding. In both instances, the singer hadn’t finished writing all the words, so filler was inserted to get the right feel, with the intention of adding words later. In the case of Redding, it was a characteristic whistle that would remain due to his untimely death. For Withers, the incessant “I know…” breakdown was kept on the insistence of the band. They liked the feel, possibly due to the success of “Sittin'”, but for whatever reason it worked. All the instrumentation is acoustic, and the song has a thumping pulse, like a heartbeat that has been slowed, by sadness or substance. Withers’ voice carries over the subdued instrumentation with a quiet charisma. The yearning is there, but it doesn’t slap you in the face like Wilson Pickett or put you on the edge of your seat like Otis Redding. It pushes you to the back of the chair, causing you to give up any tension you may have been hanging onto. It’s the point of exasperation, 4 seconds after you’ve hit the wall. It’s the final realization that you’re screwed. It’s beautiful.

Wonder this time where she’s gone,
Wonder if she’s gone to stay
Ain’t no sunshine when she’s gone
And this house just ain’t no home anytime she goes away.

Countless covers have been done by other artists. Everyone from Michael Jackson to Rod Stewart, Tom Petty to Fall Out Boy, Tom Jones and more. Others have used certain phrases or licks from the original, creating new songs out of the old, like DMX in his recording of “No Sunshine”. It’s been put in movies, and sung on shows like American Idol, and Britain’s Got Talent. Withers sang it on an old British variety show, The Old Grey Whistle Test back in the 70s, being considered one of the classic performances.

Sometimes love is a warm gun. The Beatles once said happiness is a warm gun, but I don’t think that is accurate. Love is the thing we all want, but it is as much a killer as a savior. We’re willing to die for what we believe in, even if it’s wrong. Even if all signs point to something else. Bill reiterates the fact that love’s a cruel mistress, but she’s our mistress and that makes it alright.

2 Responses to Sometimes There “Ain’t No Sunshine”…