Sitting On The Dock, With Otis Redding

Some songs are written, recorded and filed away as deep cuts that we’ll never know about, nor ever hear on an FM radio station. Then there are those that are born from brief moments of clarity and tragedy. They are created without any conception of what they will come to define, and for how many they will reach. Rolling Stone listed “Sittin’ (On The Dock Of The Bay)” as #28 out of their 500 Greatest Songs of All Time. Co-written by Otis Redding and Steve Cropper and recorded 3 days before Redding’s sudden death, the song stands out among a generation of legendary music.

Otis Redding was Stax Records main artist, beginning his career in 1962 with “These Arms of Mine”. Over the course of 5 years, he recorded a number of hits with the Stax house band, Booker T. and the MGs. Steve Cropper, Stax’ A/R man and a member of the MGs became Redding’s writing partner. They penned numerous hits together, including “Mr. Pitiful” and “Fa Fa Fa Fa Fa (Sad Song)”. Otis had been out in CA, doing a show at The Fillmore and staying on a house boat in Sausalito, when the first line of “Sittin'” came to him. Over time, he’d get another line, and then another and so on.

…Watching the ships roll in, and then I watch ’em roll away again…

Redding returned to Memphis with one line in his hand. He sat down at Stax with Steve and pieced together the new song. All they had was a rhythm guitar track, some horns, drums and Otis. When asked what it was like to write with Otis, Steve has said, “Otis was one of those kind of guys who had 100 ideas. Anytime he came in to record he always had 10 or 15 different intros or titles, or whatever. He had been at San Francisco playing The Fillmore, and he was staying at a boathouse (in Sausalito, across the bay from San Francisco), which is where he got the idea of the ship coming in. That’s about all he had: ‘I watch the ships come in and I watch them roll away again.’ I took that and finished the lyrics. If you listen to the songs I wrote with Otis, most of the lyrics are about him. He didn’t usually write about himself, but I did. ‘Mr. Pitiful,’ ‘Sad Song Fa-Fa,’ they were about Otis’ life. ‘Dock Of The Bay’ was exactly that: ‘I left my home in Georgia, headed for the Frisco Bay’ was all about him going out to San Francisco to perform.” 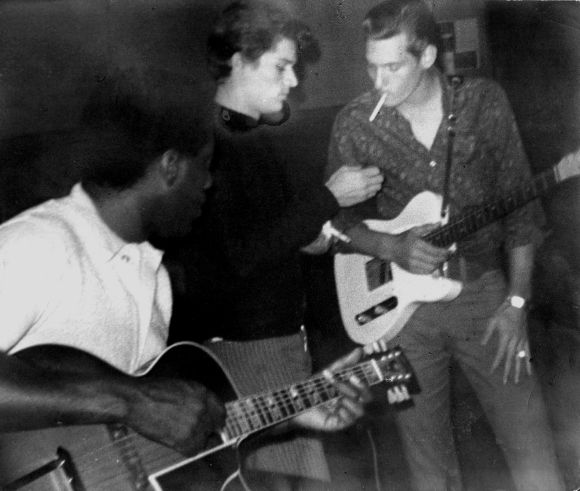 They had the basic tracks laid down on December 7. Otis had a show that weekend and the plan was for him to finish the song when he came home, but he never made it. His plane crashed into Lake Monona, just outside Madison, WI on December 10, 1967. Cropper was left to finish the song alone, which he did, adding guitar fills, along with the familiar sounds of seagulls and crashing waves. It shot up the R&B charts, winning Grammys for Best R&B song and Best Male R&B Vocal Performance. It was also the first posthumously released single to reach #1 on the charts.

So, why did “Sittin’ (On the Dock of the Bay)” become such a hit? Why did this surpass so many other recordings of that time to become the 6th most performed song of all time, according to BMI? Well, look at what Otis had to say…

Sittin’ in the mornin’ sun
I’ll be sittin’ when the evenin’ come
Watching the ships roll in
And then I watch ’em roll away again, yeah

Look like nothing’s gonna change
Everything still remains the same
I can’t do what ten people tell me to do
So I guess I’ll remain the same, yes

There isn’t a person on the planet who hasn’t felt hopeless at one point or another. All the hard work, all the struggle to make something of yourself, and nothing seems to be working out. What else can you do but just take whatever comes at you? Sit down and watch the ships come and go. Stop running so hard and just rest. There’s nothing you can do about it, the world keeps turning. It strikes a chord of familiarity. The message pierces through racial and social barriers, and hits you where it counts. So, we’re still singing the same song, after forty-some years. At least we know, if we’re gonna be watching our lives roll away with the tides of change, we have some good music to listen to.

Tweet
Written by: Samantha Harlow
Filed Under: Songs
← The Electric Sound of Lightnin’…
“It’s Got A Good Beat…” →

5 Responses to Sitting On The Dock, With Otis Redding