The Electric Sound of Lightnin’… 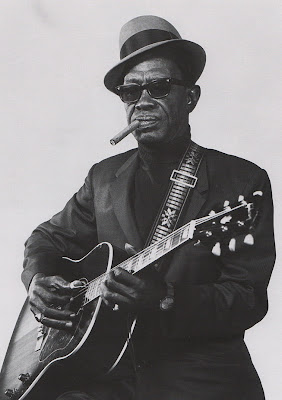 Lightning never strikes twice. It forks across the atmosphere with an untamed grace that can’t be replicated, almost accidental but never unintentional. In its wake, it leaves an energy that will make your hair stand on end. For anyone that experiences lightning, they are changed, if even in the slightest way. The same can be said about Sam “Lightnin'” Hopkins, the Texan that struck the ears of many, electrifying the musical landscape for years to come.

Samuel Hopkins was born to Abe and Frances Hopkins on March 15, 1912, just outside of Houston, TX. Abe was dead by the time he was 3, so Frances moved her family to Leona. They were a church-going family with little means of upward mobility, as were many of that time. By the time he was 8, young Sam had fashioned a guitar out of an old cigar box, learning to pick the blues surrounding him. His older brothers, John Henry and Joel were bluesmen, along with their older cousin, Alger “Texas” Alexander. Sam began his career playing alongside them, picking up licks where he could. It was at a church picnic that he met the man who would change his life. Blind Lemon Jefferson was a legendary travelling blues guitarist; supposedly he never let anyone accompany him, but Sam caught his ear and was brought under his wing. They played together at many informal gatherings, and soon Sam had developed his signature style. He went on to play with his brothers and his cousin, jumping trains, playing in towns all over Texas.

A temporary stint, for offenses unknown, at the Houston County Work Farm put his playing on hold. By the end of the 30s, he was back out, having moved to Houston with Texas Alexander to play the clubs around the Third Ward. It wasn’t until 1946 that Lola Anne Cullum found them; she was a talent scout for Aladdin Records, based in L.A., and in the span of a breath had brought Sam Hopkins back to CA. She paired him with pianist Wilson “Thunder” Smith and together they cut their first hit, “Katie Mae”, November 9, 1946. Thus, “Thunder” and the newly named “Lightnin'” struck.

The partnership with Aladdin went well enough that they asked him back for another session in 1947, which stretched into 43 recordings over the course of his career. He recorded with over 20 different labels, including Gold Star Records in Houston, Modern/RPM, Sittin’ In With and it’s subsidiary Jax, Mercury, Decca and Herald Records. He toured occasionally, doing the majority of his performances in and around Texas. Hopkins is said to have recorded between 800-1000 songs, one of the most prolific recording artists of all time. He performed mostly around his home base of Houston, on Dowling St. and in the Third Ward, settling later for performances on his front porch after surviving a car accident.

Many of his recordings were done between 1946-1954, but they rarely made it into the white community. He finally gained acclaim in 1959, when folk archivist Mack McCormick found some of his cuts and basically repackaged him as a folk-blues artist. It was the height of the folk revival, when Joan Baez and Bob Dylan were getting their start, Woody Guthrie was the anointed prophet of the new generation and the Beats were rambling their poetic rumblings in underground cafes across the country. Lightnin’ Hopkins became the gritty southern voice of homespun truths breathed out of the dusty southern air. His stories were colloquial and eloquent, humorous and forlorn. They touched different places of the spirit at intertwining moments. He was embraced by the folk community and brought to the attention of many future legends, including

His guitar playing was deceptively intricate. His finger style playing took the place of every other player in a traditional band. His strumming was both guitar player and drummer, with him beating out a rhythm on the front of the guitar. He played the walking bass lines and the guitar riffs at the same time, becoming the quintessential one-man band. Most his music was based on the 12-bar blues structure, but within that framework, his playing was loose and flowing. It all wound around the stories, which were all tongue-in-cheek, such as”Short-Haired Woman” and “Tim Moore’s Farm”.

Hopkins made his national debut at Carnegie Hall, alongside Joan Baez and Pete Seeger in 1960. He went on two record at least one album every year throughout the 60s, playing major folk festivals all over the country, traveling to Europe in the late 60s as well. In 1967, filmmaker Les Blank documented Lightnin’s laid back style in The Blues According to Lightnin’ Hopkins. He continued performing through the 70s, dying at the age of 69 from esophageal cancer in 1982.

What is left is a wealth of Texas blues, both tattered and torn, honest and beautiful. He harnessed a power unknown to many until he unleashed it with all the quiet fury he could muster. Hopkins changed the way guitarists pick up their instrument, and made it pleasurable to sing the blues. His flash continues to light up the night sky.

Tweet
Written by: Samantha Harlow
Filed Under: Artists
← The Rise and Fall of Chess Records
Sitting On The Dock, With Otis Redding →