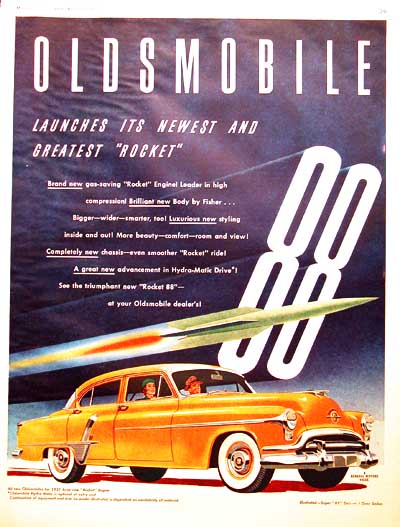 The birth of rock n’ roll happened on a long stretch of Highway 61, somewhere between Mississippi and Memphis, TN. As in most cases, it was not a planned event; both fate and poor organization played a role in the delivery. A simple mishap with a guitar amp turned out to be one of the greatest accidents in 20th century culture.

Ike Turner and his band, The Rhythm Kings, were on their way to a recording session with Sam Phillips in Memphis, but on the way, Willie Kizart’s guitar amp was ruined. There are differing reports as to what happened, the most famous being that it was strapped to the top of the car and fell off, somersaulting down the hot asphalt. Ike Turner claims that it was actually in the trunk, where rain damage had destroyed the cone. Either way, it was the only amp they had, and the only way they could play was with that amp. While setting up their equipment, Ike stuffed a wad of paper in the cone, trying to mask the damage, and what resulted was a distorted, fuzzy pitch. The first distorted guitar sound; no pedals, no special techniques. It was a big accident.

At the time, Sam Phillips was recording regional r&b acts, looking for the next big thing. This was pre-Sun Studios days, so he had to convince other labels to pick up whatever artist he had just finished pressing. In this case,

Chess Records, out of Chicago, picked up the single. Written by Ike, and based off previous jump boogie songs such as “Cadillac Boogie” (Jimmy Liggins-1947), it was sung by Rhythm Kings sax player Jackie Brenston. It was packaged as “Rocket 88″ by Jackie Brenston and His Delta Cats. It became a huge hit for Chess, charting at #2 on June 9, 1951 and staying there for 5 weeks. Brenston rode the wave of stardom briefly, never regaining the glory he reached with “Rocket 88″, dying broke and unknown in 1979.

The song is about a car, namely the Oldsmobile Rocket ’88. At the time, it was the fastest car on the market, boasting a V-8 “Rocket” engine. As with most songs of the time and the genre, it carries a dual meaning. It’s a “tongue-in-cheek” way of talking about sex, although at first glance it seems innocent enough, as this site. This isn’t something I should have to discuss at length; anyone with a healthy imagination can read the lyrics and know where they lead…

You woman have heard of jalopies,
You heard the noise they make,
Let me introduce you to my Rocket ’88.
Yes it’s great, just won’t wait,
Everybody likes my Rocket ’88.
Baby we’ll ride in style,
Movin’ all along.

V-8 motor and this modern design,
Black convertible top and the gals don’t mind
Sportin’ with me, ridin’ all around town for joy.
Blow your horn, Rocket, blow your horn

Step in my Rocket and don’t be late,
We’re pullin’ out about a half-past-eight.
Goin’ on the corner and havin’ some fun,
Takin’ my Rocket on a long, hot run.
Ooh, goin’ out,
Oozin’ and cruisin’ and havin’ fun

Now that you’ve ridden in my Rocket ’88,
I’ll be around every night about eight.
You know it’s great, don’t be late,
Everybody likes my Rocket ’88.
Gals will ride in style,
Movin’ all along.

Teamed with the rhythm and the electrified sound, it screamed its way into the annals of rock history. It finally achieved true status as the first rock song in 1991, when after a long debate, the Rock and Roll Hall Of Fame recognized it as the first true rock song.

Time and time again, the best things in life seem to happen by accident. For those of you who subscribe to divine intervention, let’s just say the Good Lord did a great job putting this together. What was looking like a lost day of recording, without a useful amp, turned out to be a turning point in music history. Hail, hail rock ‘n roll.

Tweet
Written by: Samantha Harlow
Filed Under: Songs
← Music Makers and Image Breakers: The Wrecking Crew
The Rise and Fall of Chess Records →