The voice of the mountains and the eyes of the valley are found in the songs of the storytellers who call them home. The tunes are the daily lives played over a lifetime of chords and laughter. A few tears make the refrain and all are wrapped up in the calm voice of the evening sunset. One of our most treasured and least talked about storytellers is Ola Belle Reed, who has done much to spread the popularity of bluegrass and old-time music throughout time and space.

Born in Grassy Creek , North Carolina, her given name was Ola Wave Campbell. She grew up under the musical influence of her entire family; her grandfather was not only a preacher, but an accomplished fiddle player. Her father was a multi-instrumentalist, both her mother and grandmother sang the songs of Appalachia, and countless other relatives had their hands and hearts steeped in the music of their culture. Early in life, her family had moved to Maryland, where the farming was more profitable.  By 1936, she had become adept at guitar and the old-time style of banjo, plus she was a favorite singer on the local scene. She joined The North Carolina Ridge Runners, changing her name to Ola Belle Campbell. Many of her fans were also followers of the Wheeling Jamboree on WWVA, West Virginia, where acts like Lulu Belle and Scotty had found acclaim. The name change was done for commercial reasons, for the same reason a performer today will adopt a stage name. She played with the Ridge Runners until 1948, making appearances at music parks all over the Delaware-Maryland area.

In 1945, word had got around about Ola Belle, and she was approached by Roy Acuff to join him on the Grand Old Opry. It meant being a part of his backup band and earning more than $100 a week, but she politely declined. Her brother, Alex, had gone oversees to fight and they had made plans to form a band upon his return home. When he made it back, he and Ola Belle joined forces to create The New River Boys, a band that would gain popularity over the airwaves, around the country. They were often featured on WWVA, which was in direct competition with WSM out of Nashville, TN. Along with Alex, who sang and played guitar, and Ola, who picked guitar, banjo and sang, there was Deacon Brumfield on Dobro, Ted Lundy on 5-string banjo, John Jackson on fiddle and Earl Wallace on upright bass. Together, Ale and Ola Belle composed over 200 songs, many of which were recorded by other artists in the years to come.

1949 saw changes for Ola Belle; she married Bud Reed and together with he and her brother Alex they opened the New River Ranch, a premier music park near Rising Sun, MD. From 1949-1960 New River Ranch hosted many of the biggest names in Bluegrass and Country, plus many of the local favorites, including The New River Boys. In 1960, they left Rising Sun and settled at Sunset Park, in West Grove, PA. There the group performed for 26 years, hosting a radio program every Sunday, and also gaining fame through broadcasts on WWVA, out of Wheeling, West Virginia.

The 1970s saw a re-emerging interest in old-time and early country music, which meant that Ola Belle, along with her family (which now included her son David) were making the rounds at festivals around the nation. They did this throughout the 70s and into the 80s, until Ola was overcome by a stroke, leaving her bedridden until her death in 2002.

Over the years, Ola Belle wrote and co-wrote hundreds of songs about her childhood, growing up in the hills, her faith in the Lord and social justice. In 1978, she was given an honorary doctorate of letters by the University of Maryland, for her work in developing the culture and arts in her area. The Library of Congress, The Smithsonian and The Country Music Association also gave her credit for the work she had done preserving our culture in her songwriting. In 1995, her song “High On A Mountain” was recorded by Marty Stuart, earning both a gold record. Many other accolades were awarded to her over the years. 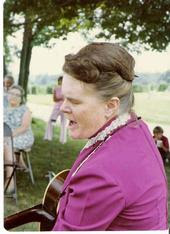 Ola Belle Reed helped to change our nation, by preserving some of its oldest and most dear traditions. Had it not been for her and her contemporaries, the music of eras gone by would have been lost amidst the fuzzed out amplifiers and tongue-in-cheek prose that came to be the mark of the 20th century. She spoke of a simpler time, when family, love and hard work were the measure of the human condition. Though they have dimmed through the years, the voices and the values remain a constant; the ebb and flow of time can’t completely wash them away. Someday, when our children are grown, they will hear our high, lonesome songs, which will in turn hark back to the plaintive mountain lament of Ola Belle.

Tweet
Written by: Samantha Harlow
Filed Under: Artists
← The “Man In Black”, In Color: The Johnny Cash Show
She Will Always Be “High On A Mountain” →